This is the official repository prepared for a dataset descriptor - A Synthetic Building Operation Dataset submitted to the Scientific Data journal.

The dataset is registered with the U.S. Department of Energy’s Open Energy Data Initiative (OEDI) and is stored with Amazon Simple Storage Service (S3). More details about the service can be found at this site. To download the dataset, first make sure the AWS Command Line Interface (CLI) is installed. Then, make sure you have enough (>1.2TB) disk space, and run the command below to download the file to the <local_directory>.

This Jupyter notebook contains Python scripts, dependencies, functions to extract and explore the dataset. The structure of the file is shown in the figure below. 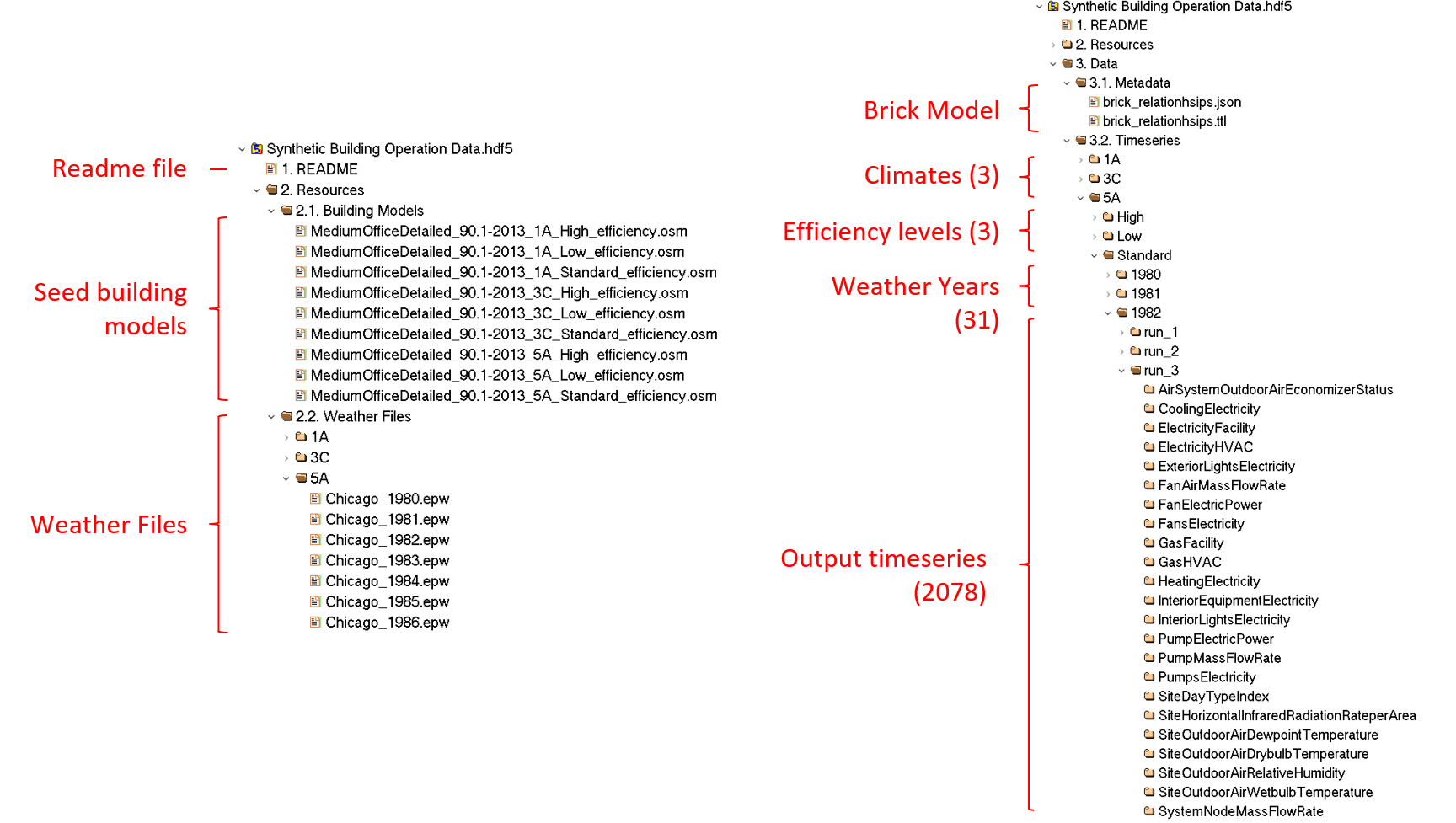 High-level flow diagram could be found in the Methods section in the paper. For details and source code of generating new dataset, please refer to the README.

The developed dataset can be used for a wide array of applications. Here, we illustrated two use cases of the large-scale high-resolution data we generated: benchmarking and data-driven building control.

The generated energy consumption and indoor environmental quality data can be used to benchmark various envelope, control and advanced building technologies, especially for areas where real measurement data is not available or inadequate. For instance, even though BPD is the largest database of measured building energy performance in the United States, the sample size of buildings in Miami is 136, which might be too small for robust benchmarking. In this case, the simulation data we generated can be a valuable complementary. The dataset provides system-level end uses and their load profiles for fine granular benchmarking, which are often hard to get from measured datasets. The temporal characteristics - high-load start time, end time, duration, and peak-to-base ratio, could be extracted from the synthetic load profiles and used to benchmark the real building load profiles.

Conventional control techniques, such as PID control, are unable to adapt to the changing building dynamics (due to different occupant behaviors, and building retrofits etc.), to balance the trade-off between multiple objectives (e.g., comfort, energy, costs, and carbon emission), and to respond to the demand signal efficiently. With the rapid development of machine learning (ML) algorithms and computational power, data-driven control becomes a promising alternative for building control. Data-driven control learns the control law, a mapping from the current states (s) to control actions (a) π_(a|s), directly from the building operational data. However, to train a robust, reliable and effective controller, high-quality data is a prerequisite. There are two reasons that it is challenging, if not impossible, to generate those data from building operations. First, the dataset needs to be huge, which requires buildings to operate for years. Second, the dataset needs to explore the state-action space as much as possible, so that the controller would not be stuck in the local optimal. Unfortunately, the existing operational data are likely to be generated from Rule Based Control (RBC), following a given set of rules. Therefore the real operational data usually locates in a limited portion of the state-action space. In this regard, the building operational data generated from simulation could be more valuable for data-driven building control for two reasons. First, it is cheap and fast to generate a huge amount of data through simulation to consider different building operation conditions and disturbances such as weather, occupancy, and etc. Second, and more importantly, different control logics could be tried through simulation without worrying about compromising the indoor environment. In real building practice, building operators are unwilling to try different control logics due to the risks of poor indoor environments. This concern does not exist in a simulation environment. Therefore, the controller could test different control laws to find the optimal one. We introduced a concrete example of how the simulation data can be used to train a data-driven controller through imitation learning. The whole point of training a controller is to learn the mapping relation from states to actions, π_(a|s). There is a whole branch of machine learning algorithms on this topic - Reinforcement Learning (RL). Imitation Learning (IL) is one algorithm of RL. The key idea of IL is instead of trying different control laws and finding the best one, why not imitate the behavior of an expert controller. We applied IL to train a purely data-driven controller using the simulation dataset we generated through the following three steps. First, we identified the ASHRAE Guideline 36, the cutting-edge HVAC control sequence used by the industry, as the expert to follow. Then, we implemented ASHRAE Guideline 36 in EnergyPlus and used it to generate building operational data (a subset of the developed dataset) under different ambient environments and disturbances. Third, we trained our controller to clone the behavior of ASHRAE Guideline 36, i.e., what the output of the expert (action) is given a specific situation (states). This is a typical supervised learning task. We compared the actions suggested by ASHRAE Guideline 36 and those suggested by the IL controller of a typical summer week. As shown in the figure below, these two controllers have similar behaviors. 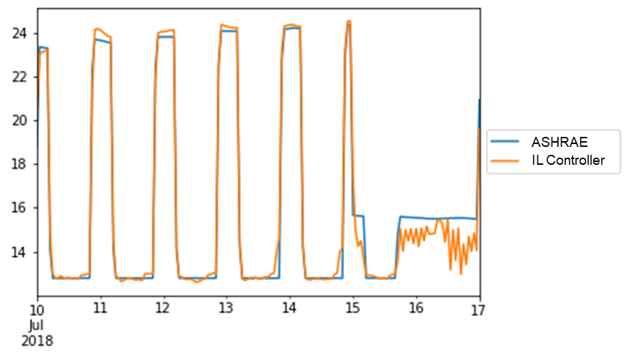 This work was supported by the Assistant Secretary for Energy Efficiency and Renewable Energy, Building Technologies Office, of the U.S. Department of Energy under Contract No. DE-AC02-05CH11231. The authors thank Harry Bergmann and Amir Roth of the Building Technologies Office for their generous support. The authors also thank Michael Rossol of NREL for loading the dataset to the Open Energy Data Initiative (OEDI) data lake.

To the extent possible under law, this site has waived all copyright and related or neighboring rights to AlphaBuilding-SyntheticDataset under the CC BY terms. This work is published from: United States.